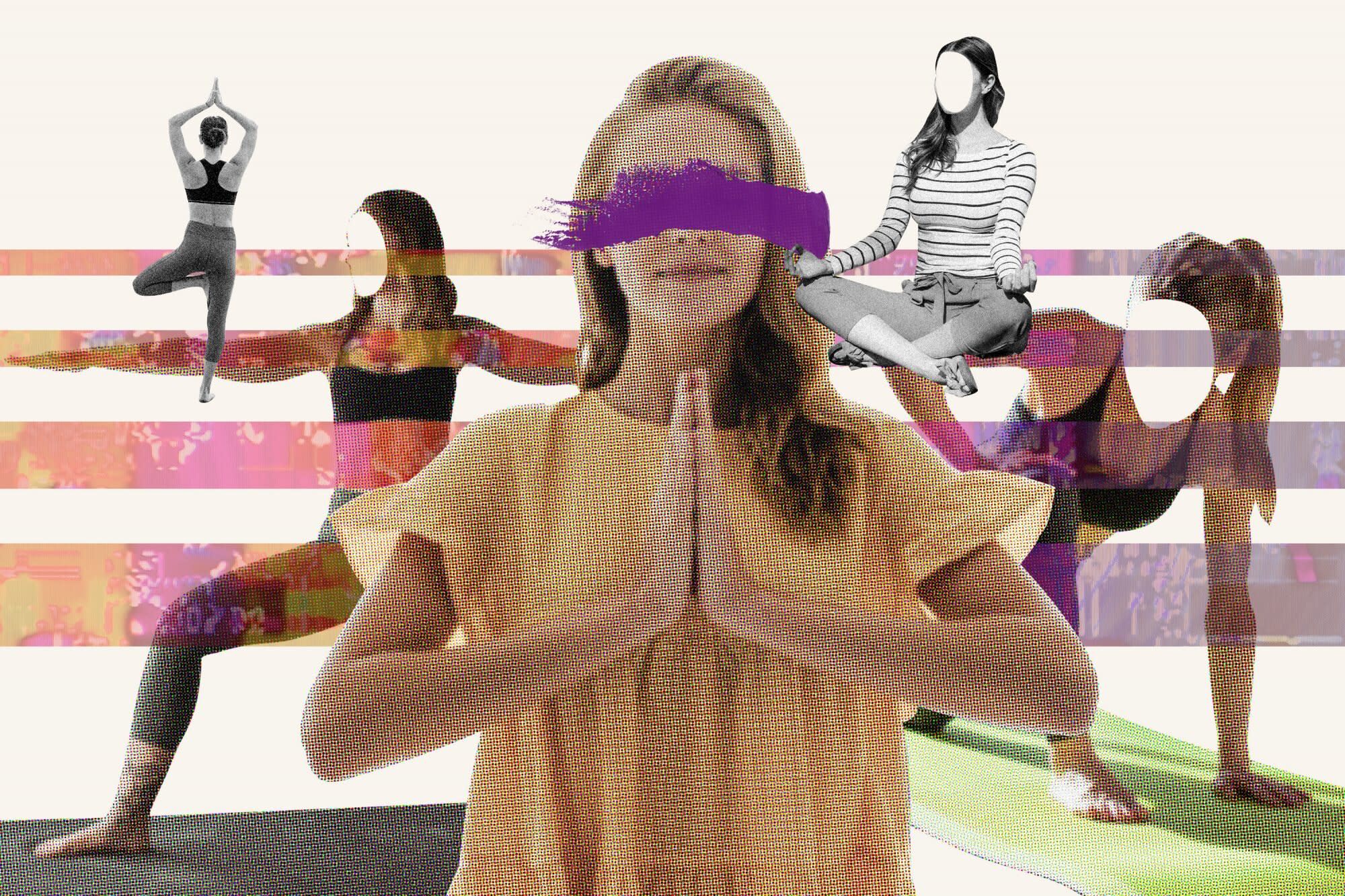 If you’ve ever taken a yoga class, or simply seen it portrayed in pop culture, chances are you associate the practice with themes like “peace,” “compassion,” or “acceptance.” In other words, it’s the last place you’d imagine becoming a hotbed for the spread of hatred and dangerous health misinformation. But for a rising number of practitioners and teachers, love and light are only reserved for people who look and think like the stereotypical white, thin, and increasingly conservative image of “wellness.”

Since COVID-19 was declared a pandemic in March, and Black Lives Matter protests began at the end of May, some yoga teachers have been spreading conspiracy theories claiming the disease is “fake news,” while also igniting racial divisions and turning a blind eye to inequities that exist within wellness and beyond. Similarly, the rise of QAnon in the yoga community has sewn division and hate — its message completely at odds with the practice’s core values of acceptance and love.

QAnon is the far-right conspiracy theory hinged on the belief that the world is run by pedophiles, most of whom are Democrats. The group, mostly made up of President Trump’s most diehard supporters, is also one of the sources of the theory that COVID-19 is a hoax. In recent months, the group has gained more popularity within the wellness community — especially among “vaccine skeptics, natural health fans and concerned suburban moms,” according to the New York Times.

In response, a collective of yoga teachers and leaders that stands united against this group responded with the following statement: “We are aware that QAnon originated in the dark web of hate and white supremacy, and have re-packaged their message as a result of the pandemic and fear of vaccinations to appeal to spiritual communities,” they wrote. “The true intent of QAnon is to spread misinformation, blame, conflict, and sew racial division in our country.”

“It’s heartbreaking to see the lack of critical thinking in so many yoga practitioners,” adds Hala Khouri, co-founder of Off the Mat, Into the World, a yoga and social justice nonprofit. “Many people who have embraced yoga as an alternative practice have conflated this with an anti-science stance that is very dangerous and is causing people to reject wearing a mask and to embrace unfounded conspiracy theories.”

There’s a history of racism in Westernized wellness culture.

Racism is, and has been for many years, prevalent across the wellness industry; many Black and brown practitioners and teachers have spoken openly about being tokenized, facing overt racism within the wellness community, and being held to a higher standard than their white counterparts. In my own community of Orange County, California, racism has taken on a life of its own.

In San Clemente, a yoga and meditation teacher and sound healer is a prominent figure in the “all lives matter” resistance — the incredibly harmful movement steeped in racism. He also organized several protests against the COVID-19 lockdowns in California, encouraged supporters to flood shopping centers while maskless, and told followers to share videos of themselves burning their masks.

This openly racist behavior — denying the plight of Black people in our country, and meeting their cries for change with disrespect and ignorance — was met by deafening silence at the time from all of the yoga studios he had taught at previously before the pandemic. [Epic Yoga and YNG Yoga, two studios where he was previously employed, tell InStyle that they no longer work with the teacher. The teacher tells us, however, that he left the studios of his own volition in March to focus on protesting pandemic closures. He says he maintains a “great relationship” with all of his former employers.]

“To us not speaking up was never an option,” says Malaurie Barber, co-owner of Soul Movement Yoga in Mission Viejo, and one of the only yoga studios in OC to actively speak out against the all lives matter movement, the roots of which are steeped in white supremacy. “We were horrified and outraged at what was happening within the nearby San Clemente yoga community. Since the opening of our studio, we have made our stance very clear: Yoga is for everyone … all bodies, all races, all genders, all religions, and all abilities.” If you don’t believe that Black lives matter, then you are at odds with this very concept. Accepting the movement goes beyond “political beliefs,” which conservatives often lament they are harangued for, or “reverse discriminated” against — despite the fact that they are not the ones dying at the hands of police; they are not the ones who are tokenized or humiliated in the yoga space. For Black people, the BLM movement is one of life and death. To not acknowledge the plight of your fellow Americans is to be ignorant and complicit; you cannot pick and choose when the teachings apply.

RELATED: Now Is the Perfect Time to Take Up At-Home Yoga

The cultural appropriation of yoga is a huge part of the problem.

You would never know the real meaning of yoga given the spiritual bypassing and co-opting of this ancient spiritual Indian practice in the west. For someone who was born and raised in the philosophy of yoga and Sanatana Dharma, more commonly known as Hinduism, it’s particularly jarring to see how far we have come from the true essence of the practice, which is unity. This deep misunderstanding has now reached new heights in the post-COVID-19 and Black Lives Matter world.

The journey of a person on the path of yoga is to recognize their own divine nature through the practice and, in turn, also recognize and honor the divine nature of others. Yoga teachers have popularized the statement “we are all one,” but unless we actually take actions to make this a reality, it becomes an empty slogan and a part of spiritual bypassing, which causes direct harm by dismissing the discrimination of those who are marginalized and oppressed.

Yoga, is, in fact, social justice, and incredibly relevant to these times. Holding a crystal and chanting OM is not enough and never has been. The cultural appropriation of yoga is rampant, and most people have no idea what OM or the philosophy of yoga actually means, which is a huge part of the problem.

The ancient yogic texts including “The Ramayana” and the “Bhagavad Gita” talk about the importance of social justice as a part of our yoga practice. Concepts such as Dharma, the path of truth and right conduct; Karma, the law of action, cause, and effect; and Seva, selfless service — these concepts appear to have been lost on members of the yoga community who never really understood the true spirit of yoga, which is love and compassion for all beings and selfless service to those in need of our protection. Leading “Make America Great Again” rallies and inciting riots are fundamentally at odds with this spirit, as they feed directly into racism, hatred, and division.

RELATED: An Explicit Guide to Being Anti-Racist

Anti-racism is yoga in action.

Collective consciousness is the heart of yoga. This translates very simply right now into being actively anti-racist as part of our yoga practice at this critical time in our history. Of course “all” lives matter — but until Black lives matter as much as the rest of our lives, we need to keep shining the light on racial injustices and systems of oppression that feed inequality. This is how we can actually become one — which is what the essence of yoga is all about.

As Senator Kamala Harris said while accepting the nomination to be Joe Biden’s VP, “there is no vaccine for racism.” This is something that we all collectively must unite to stand against — it will not magically disappear with a whitewashed sage smudging and gong bath.

We are truly in a crisis of conscience right now in wellness. We must not allow yoga to be used as a tool for hatred, bigotry, and division, or as a vehicle for the spreading of misinformation and destruction. Our duty in the wellness community, and beyond, is to believe in science — as yoga itself is a science of the mind — and combat these outlandish conspiracy theories with legitimate facts and peer-reviewed research. Over 1,000,039 million people have died worldwide and over 210,000 in the USA alone as a result of COVID-19. Reputable academic institutes such as Johns Hopkins University, the Lancet Journal, and the CDC, amongst many others, are engaging in clinical research which proves that COVID-19 is not only real, but that wearing a mask mitigates the spread of this highly contagious virus.

2020 has illustrated very clearly just how much we need each other to survive. Let’s use this as an opportunity to move away from the rife individualism that will destroy us and return to a place of collective care, love, and unity. This is yoga in action, and we need it now more than ever.