Almost a decade ago, I was subject to a racist tirade by a patient.

The patient told me, “Why don’t you go back to India?”

I responded angrily to the patient: “Why don’t you leave this [expletive] hospital?”

I sought guidance on how to cope with and respond to the patient’s racism and found little.  The institution at which I worked had no policies in place that guided my response.

I had the patient’s care reassigned to other physicians and subsequently wrote about my experience and reflections in an essay called, “The Racist Patient,” that was published in the Annals of Internal Medicine and featured in the New York Times.

My conclusion: there were limits to service and the abuse to which we might accept as healthcare professionals.

The first set of responses was from sympathetic physicians with like experiences who felt unprotected by the institutional cultures in which they worked.

I heard from an African American physician whose hospital routinely reassigned patients from his care so as to not compromise their patient satisfaction results.

I heard also from a pharmacist whose management accommodated a patient request to not have “that Paki touching [their] meds or speaking to [her] about them so make sure the other pharmacist is available.”

“I am of Vietnamese-descent and your article had a resounding impact on me.  I have experienced such overt racist and sexist comments in my career made so much more difficult when it is directed at me as an attending physician and in front of my residents.”

The second, more dominant set of responses was from physicians who held the view that healthcare professionals are somehow held to a higher ethical standard, that the unwritten code of professionalism requires us to ignore our own feelings and continue to care for patients regardless of their views.

One physician wrote an extensive letter to me in response:

“The tone and words in your article demonstrate to me that you have a long way to travel, not to India or anywhere else, but to a place in your heart that tells you that being a good doctor means that patients, even difficult patients, deserve better treatment than that which you gave to [the patient]….But upon further reflection you arrogantly felt justified in not apologizing to him because ‘there are clear limits’ to your service. Yes, doctors are not slaves, submitting to any kind of abuse but your….response was not professional.”

Another physician wrote a published letter to the Annals of Internal:

“His complaint was legitimate…You missed an opportunity to heal and win over a fellow man.”

I certainly regretted my angry instinctual initial response—but also felt that the traditional institutional perspective on abusive, racist patients is medicine’s own version of “the customer is always right.” Being a medical professional means putting yourself aside, sacrificing your own feelings, and “rising above” any abuse that we may encounter.

Most healthcare organizations have a “patients bill of rights,” but few offer similar protections to staff. Historical institutional responses to racist behavior from patients at staff is meek at best, with many operating without any formal policies or institutions.

There is evidence, however, that this is beginning to change.

In 2016, Fordham Law School’s Kimani Paul-Emile and colleagues at University of California San Francisco laid out a framework in the New England Journal of Medicine guiding the reassignment of racist patients acknowledging that “physicians and other health care workers have employment rights that must be balanced with patients’ rights.” The framework also suggests that accommodating racist patients might be a violation of Title VII of the Civil Rights Act.

The report was the output of a conference of a diversity of healthcare leaders this past in February before the death of George Floyd and the peak of the COVID19 crisis—but is more timely than ever (my colleague Pooja Chandrashekar of Harvard Medical School and I presented a paper on discrimination towards healthcare professionals in advance of the conference that was published last week in Academic Medicine).

The dialog at the conference demonstrated an awakening of the profession that seemed unthinkable to me even a decade ago when I looked—without success—for guidance on how to manage through my own small brush with racism.

Macy Foundation President Holly Humphrey in the preamble to the report issues a stirring call to action and welcome message to a profession that has too often avoided hard conversations and obscured them in the language of professionalism:

“As health care leaders and professionals, we have been careful with our words and deeds for too long—careful to use polite language when talking about uncomfortable topics; careful to seek change gradually and bring people along at their own speed; careful to protect the reputation of the world-renowned clinical systems in which we trained and which have done so much good for so many; careful to be respectful of the fact that we have devoted our lives to caring for others. While being polite and doing good, however, we have also enabled injustice to flourish unchecked. We must do better.”

With deliberate action, Humphrey and the influential Macy Foundation may drive much needed culture change around issues of race and discrimination in healthcare—especially towards individuals who learn and work in the healthcare system.

In writing this post, I resurfaced one of the more memorable and poignant responses to my essay:

“When I was a boy (very many years ago, I fear), I went every Sunday to Sunday School, which was invariably presided over by a variety of [teachers] who were very kind, very devout, and who lived very protected and genteel lives. Always they would instruct us that if other children pushed or hit us, we should never push or hit back, but should instead run to the nearest teacher or other adult and report to them what had happened. Even as a child, I realized that that was the most utter nonsense. It would appear that our conduct as physicians is now being informed by those same kind and naive old [teachers]. In fact, it is totally appropriate to sharply put down those who would show us less respect than we have shown them. That is, indeed, ‘an interpersonal skill’ that we all should be masters of.”

Maybe medicine and the health care industry will finally get it.  The critical nature of the work we perform in healthcare should never be used to justify subjecting those who deliver care to racist acts.

Mon Sep 28 , 2020
Matthew Bailen is a critical care educator at Mercy Hospital as well as as an experienced marathon runner. BUFFALO, N.Y. — At the beginning of the COVID-19 pandemic, people across Western New York found a number of ways to show their support for the healthcare workers. Now there’s another opportunity […] 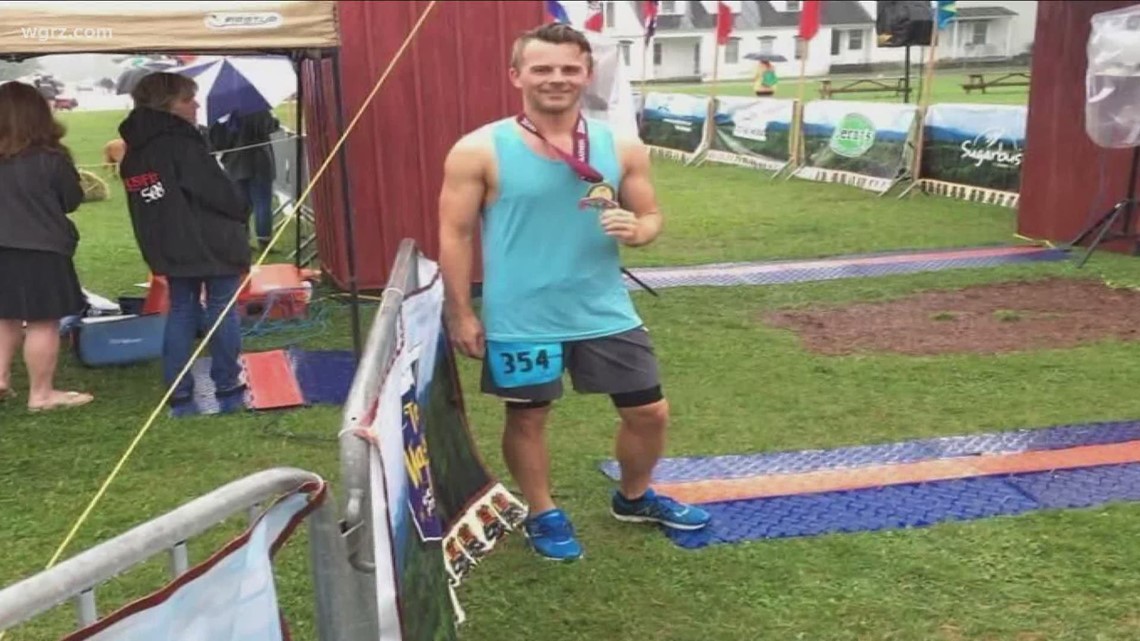