Come, human; get some love

This is definitely not a call for replacing humans with animals, but merely an invitation to enjoy all the love and affection they have to offer (albeit in a different manner). Though dogs do not exactly hug, they often sit in front of their human of choice, facing forward, waiting to be hugged from behind. And cats often headbutt their human friends; it’s their way of marking you — in a way, they’re giving you a kiss. To each pet their own way of expressing affection.

Such gestures are among many that we aim to shed light on when it comes to these animals, hoping that this week’s edition could be a reason why more people adopt animals or get more involved with them in general. We hope to give you, our readers, a taste of this wonderful connection, had you not experienced it before.

Honest as we always are with you, dearest readers, we have to say that dogs and cats are at risk of many dangers, which include children that have been raised to abuse animals, adults who believe they should be punished because they’re “impure” (in the case of dogs) or “bad luck” (in the case of black cats in particular), to thirst and heat in the summer and cold in the winter, and year-round hunger, as well as other atrocities we’d rather not go into right now.

Anyway, most animal lovers in the world fall into two categories: cat people and dog people. There are many similarities between cats and dogs; both descend from carnivores who later evolved to seek the company of humans — a massive biological change. Dogs are descended from wolves (canines), and cats from the family felidae — wild cats, such as lions and tigers.
Caring for a dog is a responsibility almost as big as caring for a child, while cats are a bit more independent and self-sufficient — some may say that humans are their pets, not the opposite; they purr demanding food or affection and have also developed a sound to address humans, which is mewing (big cats and wildcats do not mew). The conversation about the difference between taking in cats and dogs is a really long one, but, in all cases, outside of our homes they go hungry; so, if you have the ability, do leave them a little food outside your house or wherever you come across them on the street to help them get by. This is the most basic level of involvement a human can get with an animal: to form a daily commitment towards them, providing them with food and water regularly. The biggest commitment, of course, is creating a shelter for stray animals, for instance. But we’re aware that’s not the easiest of endeavors, so it doesn’t really have to be that; simply adopting or rescuing an animal would suffice.
In the case of adopting/rescuing a dog, it’s crucial to be informed about the license requirements recently imposed by the government in order to combat the spread of rabies. In the case of adopting/rescuing a cat, however, there is no need for a license, but they do need to be vaccinated and — if taken in at an early age — formula fed. In all cases, consulting a vet is necessary in those first stages.

A little over two months ago, our relative was walking her dog one night when the dog discovered a shivering puppy, all alone in the street. We decided to adopt the beautiful little creature our friends had found, a tiny baladi dog with bright white fur. Our son chose the name “Leila” (which means “night” in Arabic), and we decided that her full name would be “Leila Hanim Beida” (Bright Lady Leila). The night she came into our lives did feel like an exceptionally bright one, and since she was going to be living in our home her transformation from a scared stray to the cherished “Lady of the House” was guaranteed. 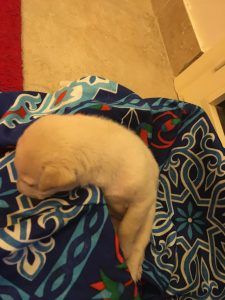 Yet soon enough the name we chose so carefully was abandoned, and we began calling her the Bat-Dog instead. We noticed a new, orange color start to appear on her trail and her ears, which spread out behind her like bat wings when she lay back on the floor or the couch, asking for cuddles. We took all the necessary steps: she was bathed and checked for ticks, vaccinated, and fed steady doses of skimmed milk mixed with water in an attempt to simulate the texture of mother’s milk. We also simulated other things the mother dog would do: where the mother would lick her pups to help them poop or pee, we would massage her with a warm, damp cloth until she would accomplish the task. We also gave her the required vaccines. 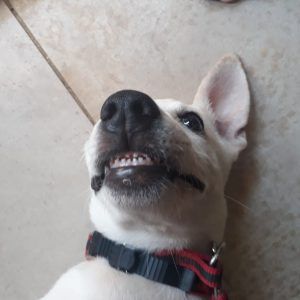 And then she started teething, and biting, and now our bodies bear the marks and bruises she leaves behind. We watch her scrape her teeth against wood, marble, plastic. She sharpens them, polishes them, as though warming up for her next round of bites. She tirelessly chases us around the house, and her teeth always manage to find our skin.

We love her, so we remind ourselves. It’s just a phase and it will surely pass; we’ve been through worse. We say that as we watch her sleep, ever more beautiful, especially when she lies flat on her back, paws against her chest, and once again we see the little bat emerge. 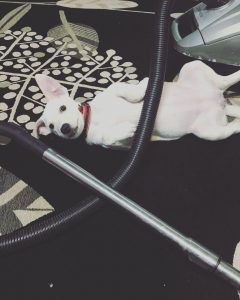 A cat amidst the books

On a scorching hot day in summer 2016, we went to Sur Al-Azbakeya in search of a few books for a project we were working on. While busy looking for the titles we sought among endless rows of old publications, drowning in a sea of dust, we heard a weak, faint sound that we could barely make out as mewing. We looked and looked till we found her under one of the shelves, and when she saw us — or rather felt our presence; as her eyes were barely open — her meows became more frantic. It was a clear cry for help. 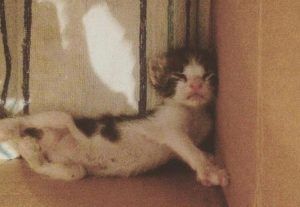 We asked the salesmen if she had a mother around somewhere and they said she hadn’t appeared in days. We tried to go back focusing on our task, but we couldn’t ignore what had just been revealed to us. We watched her take small, shaky steps outside the tiny kiosk, exploring her surroundings — daring yet tentative. The alleys of Sur Al-Azbakeya are full of cats; she tries to approach one but is met with a violent hiss and an aggressive stance. She cowers back then steps forward again when the older cat walks away. A motorcycle zooms by and she retreats in fear. She will definitely die if we leave her here. We ask the salesman for something we can carry her in, he brings us a cardboard box adorned with the words “The Beginning and the End by Ibn Katheer al-Dimishqi” in fine Arabic calligraphy. I refer to her as “she,” but at the time we didn’t really know, yet we decided to name her al-Dimishqi anyway, and after finding out — upon our first visit to the vet — that she was indeed female, we decided to “dilute” the name into the slightly more feminine Dimishki, which is what we have been calling her ever since (her official name remains al-Dimishqi, though).

Yes, she’s still with us, and she’s four now (32 in human years), but our journey together hasn’t been easy. She wasn’t even two weeks old when we took her home, which means she was not weaned yet, and needed milk to survive. We fed her four times a day using a syringe filled with 5 milliliters of a mixture prescribed by the vet: skimmed milk, the white of one egg, and a children’s vitamin. We fill a hot-water bag and wrap it with a small towel for her to sleep on, as her body still couldn’t regulate its own temperature; kittens rely on their mothers for warmth at that age. We massage beneath her tail so she managed to go after every meal. She grows up and begins to climb the sides of the box on her own, then begins to wander around the room. 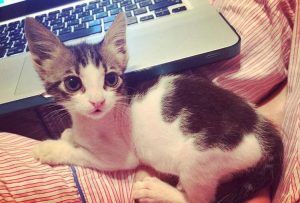 Now begins the difficult part, the demarcation of territory between her and Mahmoud Morsi, our older cat, who stands alert behind the door, feeling the danger that has come out of the blue to threaten his kingdom, even if he can’t see it yet. We can’t let her out, and we can’t let him in. At first, we succeed, while she gets used to eating dry food and using the litter box we put in one corner of the room. She finds the process of drinking a bit difficult to master, as she submerges her whole face in the water bowl, but she eventually manages. She starts teething and makes our hands and legs her prey so we leave her the whole room and sleep in the living room.

One day we get distracted and Mahmoud has his way with her. She hides under the bed for hours, then she comes out with dried blood around her left eye. We take her to the vet, we struggle with our guilt, we make sure she gets her eye drops three times a day, despite her fierce resistance. We learn; we figure out new and more complex methods of separating our cats. We have failed to make them become friends, but today each of them has their own territory in the house that the other rarely approaches. 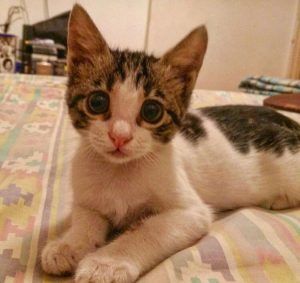 It’s all under control. Or so it seems, sometimes. Those who use the term “cat owners” have probably never dealt with cats. Cats, my friend, are owned by no one.

*Although actual people have written the above texts, based on their real experiences, we opted not to include any human names in this week’s edition.

Tested: Lenovo's X13 Yoga Is a 2-in-1 ThinkPad Fans Will Love

Mon Sep 28 , 2020
This site may earn affiliate commissions from the links on this page. Terms of use. I’ve always found Lenovo’s Yoga series of laptops intriguing, as they mix some of the features of a 2-in-1 with the performance of a traditional clamshell laptop. So I was eager to test out the […]