Healthcare workers (HCWs) are among the most important people in the current fight against the COVID-19 pandemic. However, the cost is high, since they are naturally exposed to patients at varying levels of infectivity. In fact, the US Centers for Disease Control and Prevention (CDC) estimates that HCWs make up more than a tenth of all reported COVID-19 cases.

A recent Northwestern University Feinberg School of Medicine study published in the preprint server medRxiv* in September 2020 shows that the use of standard guidelines of infection control, including personal protective equipment (PPE), helps to prevent the undue risk of infection among HCWs as well. 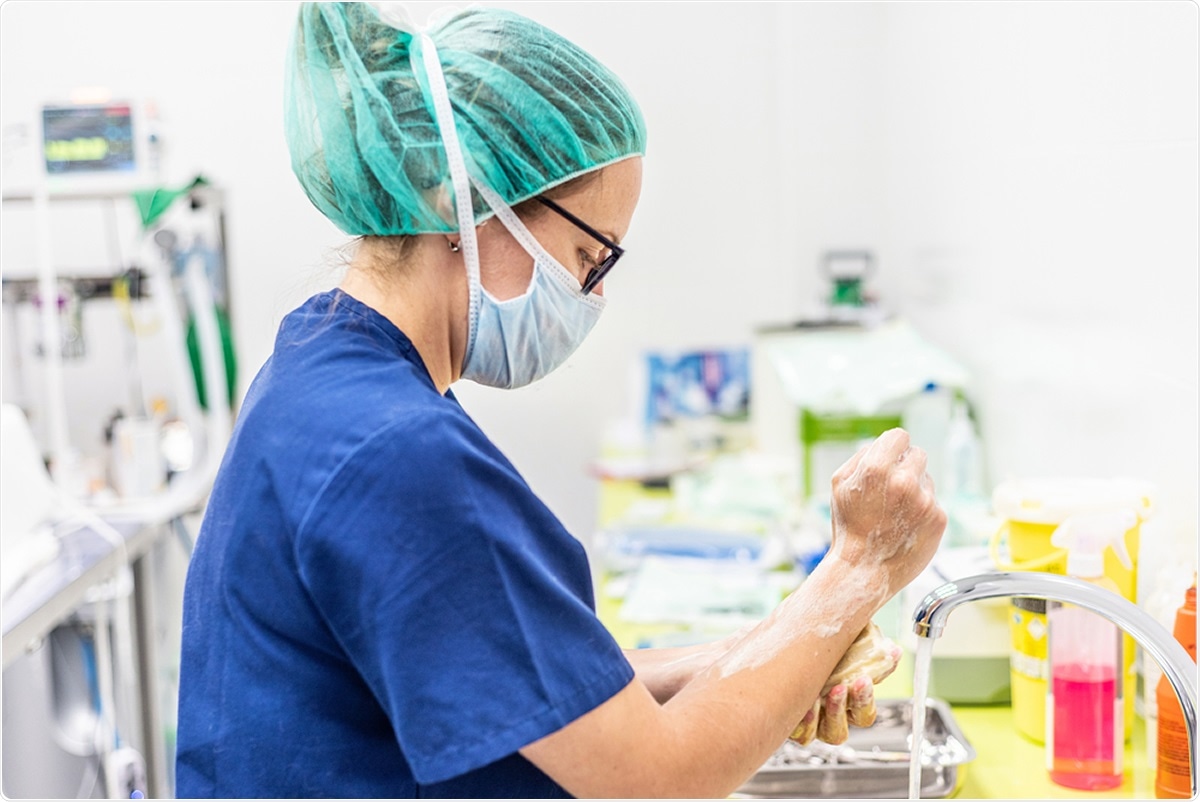 Unlike the early crisis days, PPE is more readily available. The researchers wanted to find out the impact of this change on the rate of infection in the HCW community. Particularly, they aimed to compare the risk posed particularly by occupational exposure with that due to community transmission, so as to mitigate the risk to these essential workers.

Chicago city had a high and early peak in the number of cases, hospitalizations, and deaths. This was accompanied by a ramping up of public health efforts and measures aimed at increasing inpatient capacity, to ensure the availability of PPE supplies. The current study, therefore, focused on the health systems in Chicago, which may help to provide an idea of future risks to HCWs and the future support systems that are required. 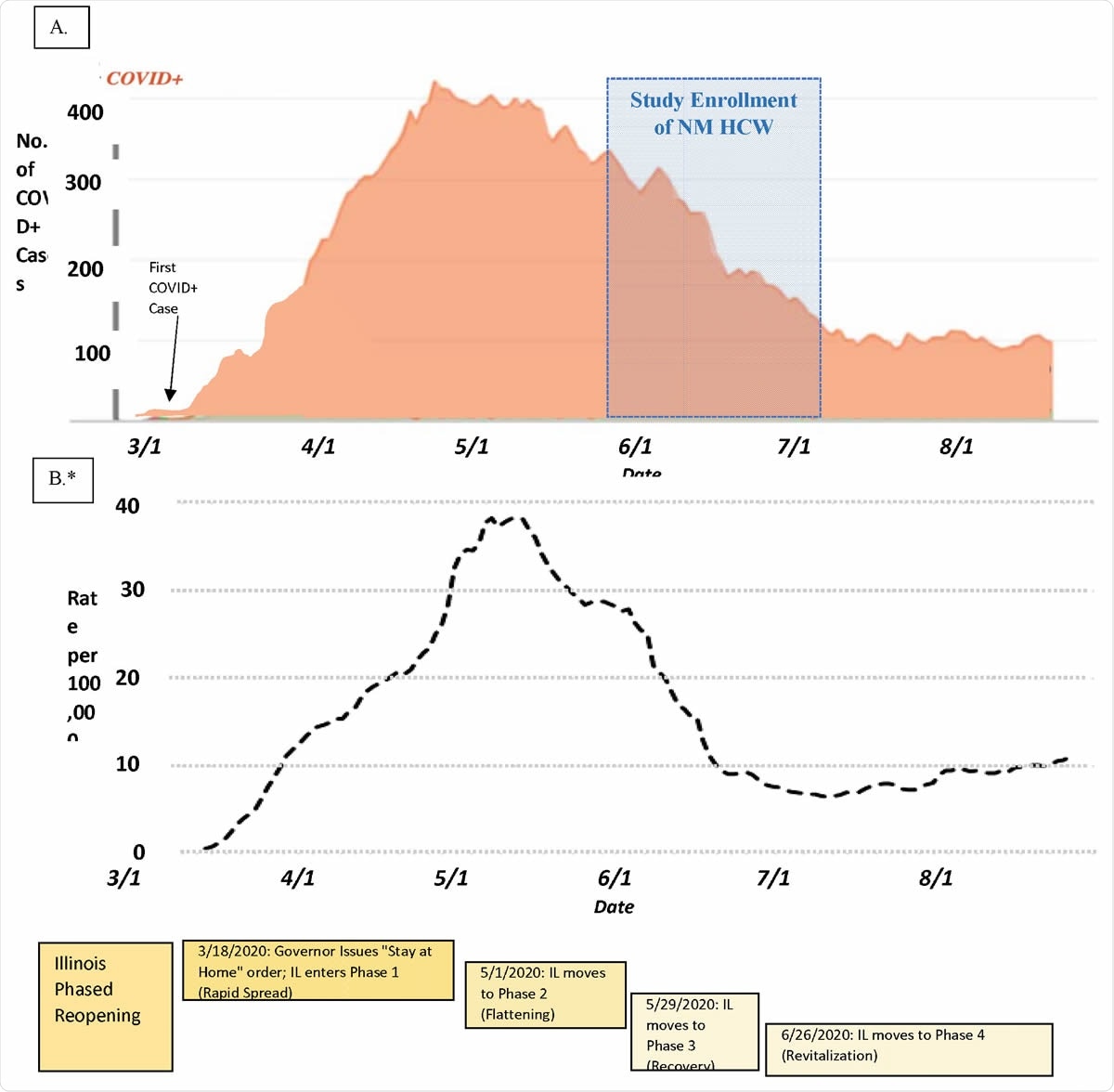 The researchers set up the Northwestern Healthcare Worker SARS-CoV-2 Serology Study Cohort in May 2020 to look at the prevalence of seropositivity for SARS-CoV-2 among HCWs. This was further broken down by occupation, the type of task they did as well as their social and demographic characteristics.

In the current study, ~80% of the participants were women, and ~75% were non-Hispanic whites. About 10% and 7% were Asian and Hispanic, while Black participants made up about 3% of the cohort. The mean age of the cohort was 41 years. The largest subgroups were made up of nurses, physicians, and administrators.

They obtained data on the exposure these HCWs were experiencing at the community and household level, to find out what proportion of infection among this group of workers was due to exposures outside their workplace, that is, outside hospital.

The researchers hypothesized that HCWs who were involved in procedures that generate aerosols, who were exposed to patients with COVID-19, and those who reported other routes of exposure, would have a higher rate of antibodies to SARS-CoV-2.

They found that overall, the crude and adjusted prevalence for IgG anti- SARS CoV-2 positivity was ~5%. Those between 18 and 29 years had a higher antibody prevalence, at ~7% vs. ~4% for older people. Both Hispanics and Blacks had the highest seropositivity rates, at ~10% each. Both Asians and White HCWs had prevalence rates of about 4.5%. Males and females had similar rates of seropositivity, and no significant difference was observed in the presence of diabetes, hypertension, and obesity.

Exposure Out of the Workplace

The seropositivity among the 10% of participants who reported having been exposed out of hospital was 15%. The odds for seropositivity in this group were almost five times higher than for those who weren’t exposed. Those who had been exposed to a family member at home seroconverted in over 50% of cases. Again, the odds in this group were ~27 times higher than in those who did not have a positive family member.

The researchers found that the crude prevalence rate was ~10% for HCWs in support teams, such as food services, environmental services, and patient transporters, as well as in medical assistants. For nurses and respiratory therapists, it was about 8% and 9%, respectively.

Among administrators, the crude rate of seropositivity was ~4% and for physicians, 3%. Overall, therefore, the odds for higher seroconversion were 2 times higher for nurses relative to administrators. Among physicians, the rate of seroprevalence was ~6% for surgeons and anesthesiologists, but only half that for Medicine and Family Medicine. For emergency medicine specialists, it was 4%, while for pediatricians, it was 0.5% and zero among pulmonary/critical care specialties.

These prevalence patterns probably reflect the prolonged exposure to these patients and are strong predictors of a positive antibody test.

Surprisingly, procedures traditionally associated with a higher risk like intubation, bronchoscopy, and surgery had no higher seropositivity risk.

The researchers found that the highest rates of seropositivity were in the Southwest and Northwest areas of Chicago, with low case rates in the North and near-North suburbs. This was reflected in the pattern of residence of the study participants as well.

The study also identified the same risk factors that are related to increased COVID-19 prevalence in the community. One such factor was Black and Hispanic subgroups. Further research is required to understand the social and economic characteristics, behavioral attributes, and community events that are linked to viral spread within the neighborhoods where these HCWs reside.

Participants without a self-reported prior history of COVID-19 had only a 1.4% seropositivity rate for IgG antibodies, but these made up a quarter of all seropositive in the study. About 7% and 10% of those who suspected a prior infection with SARS-CoV-2 but had tested negative or were not tested at all, respectively, were seropositive.

On the other hand, those who reported having tested positive had an 87% seroprevalence. The study also suggests that about a fifth of participants were seropositive despite their being unaware of the infection. This agrees with earlier estimates of asymptomatic infection rates, from 20% to 40%, both at the population level and in the HCW community.

Impact of COVID-19 on Health

Almost half the seropositive participants reported that their health had declined after the infection. Secondly, those who reported having lost smell or taste had 13 times higher odds of being seropositive.

The study is not entirely generalizable, first because the study represents an extensive health system that had a steady and adequate supply of PPE throughout the period of the pandemic, along with stringent infection control policies. The prevalence among HCWs is likely to be far otherwise in communities where the burden of disease overwhelms the health system due to limited resources or huge numbers of cases.

The sample was also skewed towards white HCWs, which may have altered the estimated outcomes. Thirdly, the data on the occupational group and task was gathered from surveys, which may have resulted in recall bias. This is not obvious, however, when analysis is carried out to adjust for the possibility that the knowledge of serology, which was available first, might have altered the answers given on the survey.

Again, the uncertainty about the universality of antibody development in COVID-19 may have caused improper estimates of seroprevalence. Nonetheless, the study provides useful indications of the sources of risk to HCWs and how this may be minimized.

Despite the increased risks of seropositivity associated with healthcare occupations, the largest contribution to seropositivity was from community and household exposure. Among all the healthcare workers, higher odds of infection were associated only with nurses, probably because they are an essential part of every patient care team, which is a task in which the caregivers are brought into frequent and close contact with patients.

Another probable route of transmission of COVID-19 among HCWs is social mixing, especially in smaller groups like nurses, who meet for meals or other occasions. This may lead to infection clusters among nurses, who are almost always female. This pattern is probably reflected in the current study, where most HCWs and hence

Overall, the study suggests an aerosol- and exposure-related risk of exposure, which in turn is related to particular occupation groups because of the unique healthcare tasks they carry out. The implications are that PPE availability and correct use, as well as taking careful precautions against the spread of infection, are adequate to protect HCWs as long as their exposure is brief. At the same time, prolonged exposure is not adequately countered by such measures alone.

The study suggests that the risk of infection in HCWs was a little lower than that found in other New York and Spanish studies, but similar to a Danish study. Nurses were the group at the highest risk among HCWs. However, this risk seems to be successfully mitigated by using adequate PPE and taking precautions to prevent the spread of the virus.

In such a setting, therefore, most of the risk to the HCWs comes from the community and not the workplace. This will require sustained public vigilance, along with the use of PPE and infection control policies for further risk reduction.

medRxiv publishes preliminary scientific reports that are not peer-reviewed and, therefore, should not be regarded as conclusive, guide clinical practice/health-related behavior, or treated as established information. 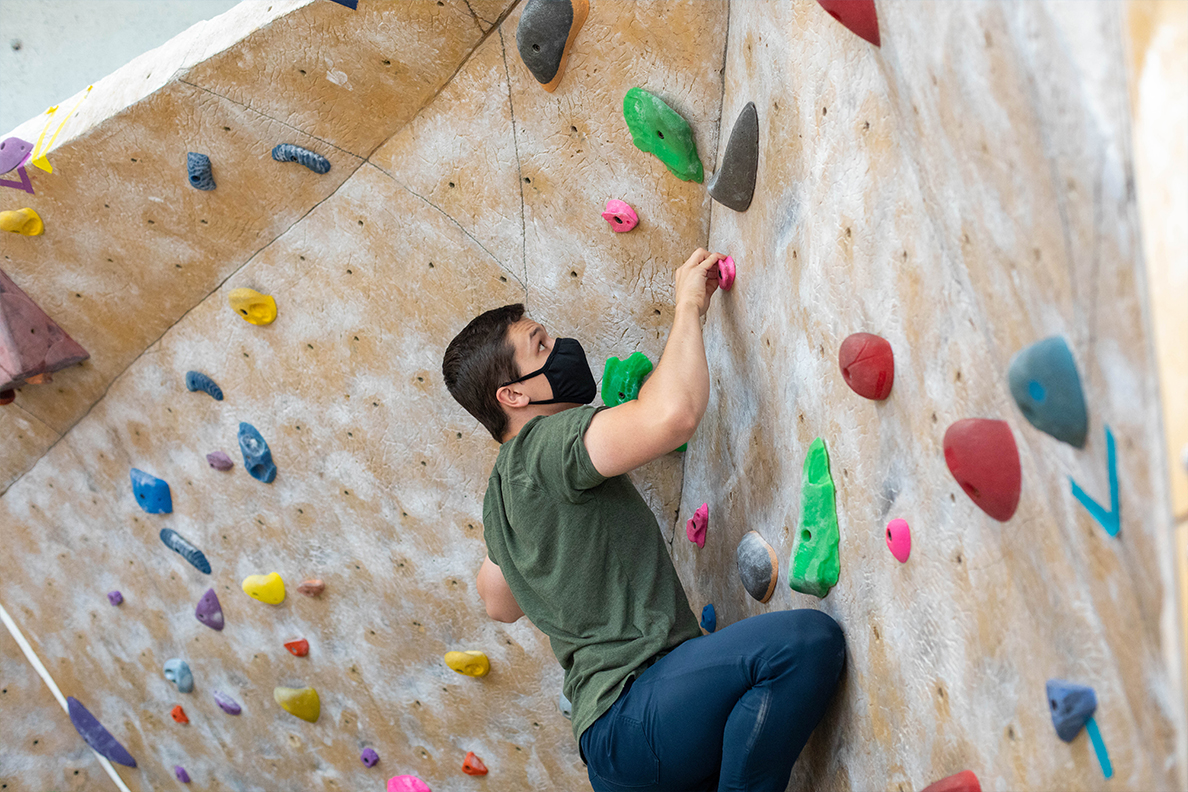