It seemed like a good idea at the time, setting up yoga mats amid a field of roaming cows, but Lancashire Farm Dairies’ single “yoga with cows” session in mid-August has become a source of contention. The dairy, which is located in Leyland, England, recently hosted six people for what it deemed the UK’s first cow yoga class.

The idea was to set up a mat in a field and watch the cows wander around while holding yoga poses. From the UK edition of the Huffington Post, “Participants exercised while ‘enjoying the countryside and roaming with these wonderful animals’, which are thought to help reduce stress levels.”

The event caught the eye of a Hindu cleric, Rajan Zed, who heads up the Universal Society of Hinduism, based in Reno, Nevada. Zed spoke out against the misuse of two significant symbols of Hinduism – yoga and cows – and said they were being trivialized.

“[The] cow, the seat of many deities, which was sacred and had long been venerated in Hinduism, should not be used as [a] prop for human entertainment,” Zed wrote. “Real yogis should not attend such events where cows were inappropriately used, causing unnecessary disturbance to cows and putting them in stressful situations. Cows should be left well alone and accorded the respect they deserved.” Zed also expressed concern that “unpredictable cows could be a distraction in a path of self-discovery that drew the yogi inward.”

Not all Hindu leaders agree with this perspective. Satya Minhas, who heads up the Hindu Council UK, said he did not interpret it as disrespectful to Hinduism. “This company is selling a very nice yogurt, not beef, so provided the cows are treated well, from a religious point of view, I personally cannot see anything wrong.”

Lancashire Farm Dairies apologized anyway and canceled all future cow yoga classes, but a dairy farm in Loretto, Pennsylvania, offering a similarly “udderly awesome” cow yoga class that Zed criticized, refused to call it off. Vale Wood Farms director Carissa Itle Westrick argued that cows are, in a way, sacred to her, too: “Generations of my family have worked with generations of our cow family. We really take pride in introducing people to the cows with events like this.” Westrick said the cows are kept separate from the yogis.

Having only done yoga inside a studio or house, I cannot speak for the benefits of practicing it among roaming farm animals, but it does strike me as an odd combination of interests, not to mention potentially unhygienic. A friend who did goat yoga said there was fresh, smelly poop all over the ground by the time the session was over, and I can only imagine how doing it among cows would be even worse (unless they’re kept separate, as done at Vale Wood Farms). Goats are small and nimble, but cows are big and heavy, even if they are gentle – not the kinds of animals I’d want to trust to keep their distance while I’m contorted into awkward, vulnerable shapes.

Still, I suppose everyone needs a way to stay active, and if doing yoga among farm animals is your thing, so be it. You’ll have to head stateside, though, if you’re in search of cows – although, as far as I know, there have not yet been any British complaints about yoga with alpacas, chickens, or pigs, if you’re willing to branch out.

Thu Oct 1 , 2020
Graphic showing how the U.S. population in the next 40 years is projected to become more diverse and older. A new study by Johns Hopkins Medicine and the Association of American Medical Colleges suggests that the physician workforce in internal medicine needs to reflect this change to provide quality health […] 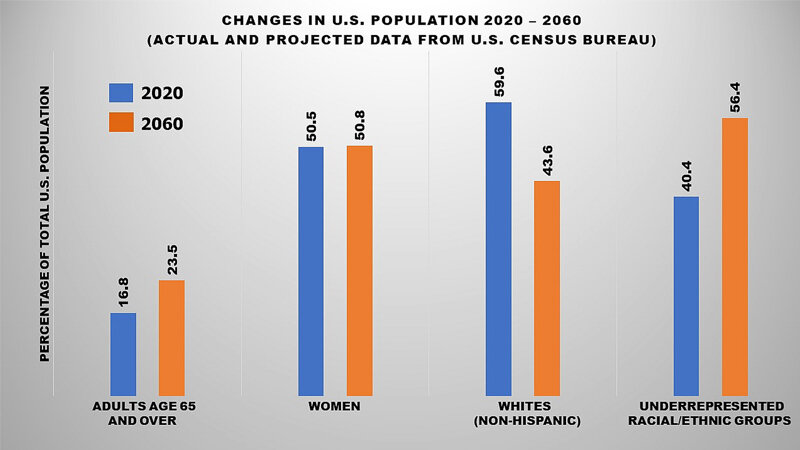