On Sept. 13, yoga instructor Jane Austin stopped by the Yoga Tree studio on Valencia Street in the Mission District. She wanted to say goodbye to the studio where, before the pandemic, she spent years teaching prenatal and postnatal yoga to thousands of mothers from around the Bay Area. She wanted to spend a moment in the space where laughter, tears, sweat and a little amniotic fluid had flowed. While she was there, she decided to chant the yoga sutra that she recites every class — in better times, her words reflected back by a chorus of women’s voices.

This time she sang alone.

While San Francisco recently allowed gyms and fitness studios to resume indoor operations at reduced capacity, Yoga Tree’s seven locations in San Francisco and Berkeley will not reopen while social distancing measures are in effect. Earlier this month, CEO Brian Cooper of YogaWorks, the national studio chain that owns Yoga Tree, sent an email to instructors: “(I)n order to survive, our studio operations must go into hibernation for the foreseeable future,” it read. “We realize that the studio footprint may look substantially different on the other side, but this is our only option to keep the company afloat through this time of uncertainty.”

When Austin visited the Valencia location in San Francisco on Sunday, a “for lease” sign was hanging in the window. “I’m still really emotional about it,” she said. “It’s what we built there. It’s not the walls and it’s not the floor. It’s us in that space.”

Yoga Tree was founded by Tim and Tara Dale in 1999, starting with a single studio in the Haight-Ashbury neighborhood and expanding to six studios in San Francisco and one in Berkeley. YogaWorks bought the company in 2014 but kept the Yoga Tree name and allowed it to keep operating largely unchanged, Austin said. 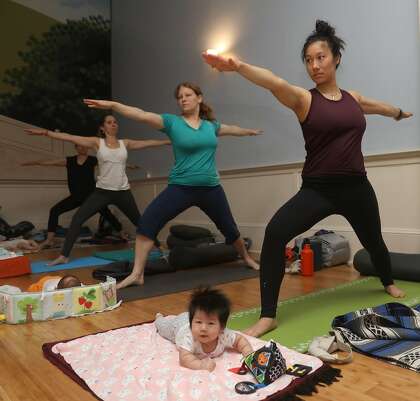 When the coronavirus pandemic closed fitness facilities across the United States, YogaWorks quickly transitioned to virtual classes, launching YogaWorks Live with instructors around the country streaming vinyasa flow and yin sessions from their living rooms. While the Bay Area locations have remained dark since mid-March, YogaWorks began teaching in-person classes again during the summer in cities where studios were allowed to reopen at reduced capacity.

On Sept. 14, San Francisco permitted gyms and fitness studios to resume indoor operations at 10% of normal capacity and with a minimum of 12 feet of distance between people doing high-exertion activities that raise breathing rate and 6 feet of distance between those doing low-intensity exercise such as stretching, gentle yoga or meditation. Group cardio classes, like spinning or kickboxing, are not allowed indoors.

But for YogaWorks, the math of 10% capacity — or even eventually 25%, if restrictions are loosened further — just didn’t pencil out.

On Sept. 11, YogaWorks shuttered all its studios. “It is not possible to make the unit economics of the studio business work under current social distancing guidelines that limit the number of students we can teach in-studio,” Cooper wrote in an email to The Chronicle.

He did not respond to questions about whether the closures of Yoga Tree’s Bay Area locations were permanent, but in the email to instructors, he wrote that while the company had hoped its digital operations would carry it through to the other side of the pandemic, “we have reached a point where that is no longer certain.”

Lidia Valdez, who worked as San Francisco district manager for Yoga Tree and YogaWorks before taking a new job earlier this year, said the Bay Area studios were a place where people could practice at all levels and not be judged. She credited the teachers with creating an atmosphere that was welcoming and inclusive, and one that didn’t ignore the stresses outside the studio door. 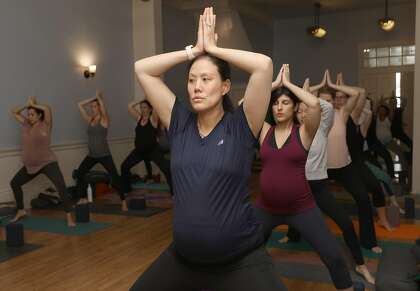 “In yoga it’s called sangha, community, that idea that we’re here obviously to improve our health and wellness but also to learn from one another. It’s like a little therapy too,” Valdez said.

In the email to instructors, Cooper noted that teachers who were not currently working on one of YogaWorks’ digital operations and had been furloughed were now permanently laid off.

Austin said that YogaWorks was as transparent as it could be with teachers as the pandemic played out, and that the company held multiple meetings over Zoom with 75 people tuning in to hear from management.

“It always felt kind of ominous. Like, wait a minute, is that an iceberg?” she said. “For a long time they were looking at the well-being of the teachers, and then they had to cut and run.”

Janet Stone has been teaching at Yoga Tree for 19 years, mostly at the Castro area location in San Francisco. Before the pandemic, she spent about half of her time traveling, but when she was in San Francisco, she taught four classes weekly at the studio, approximately 140 students on their mats for each one. She raised her daughters, now 17 and 14, there, nursing them while she led students through their practice.

“If you ask anyone who had come into that space, you’ll hear people held each other through everything,” Stone said. “The intensity of community, the compassion and kindness that showed up in that space — all the ways of elbowing your way through city life fell away.”

She and Austin are teaching virtual classes via their personal websites, but said it isn’t the same.

“I’ve been pushing my dining table in the living room and teaching next to my kitchen with the idea that this is temporary, and now it’s not temporary,” Austin said. “Now there’s nothing on the other side. There’s no yoga studio waiting for me — or anybody.”

Valdez said she was sad to hear the studios might not reopen. “But yoga’s not within four walls. It’s how we live and how we communicate with each other,” she said. “It’s definitely a place that I hold really highly in my heart. And I’d like to see it hopefully come back.”

Stone said the studio’s closure has been particularly hard on her students. A video thank you to Yoga Tree Castro that she posted on Instagram received more than 100 comments from people paying tribute to the studio and their time there.

“It was one of their lights of hope,” she said. “When we get to re-emerge and come back together, it was one of the places that they had envisioned.”

Mon Oct 5 , 2020
NHS staff who risked their lives during the coronavirus pandemic are demanding a pay rise and threatening strikes despite warnings of a second wave. Nurses and other healthcare workers are demanding a 15% pay rise to reflect the contributions they made and to make up for “years of pay erosion”. […] 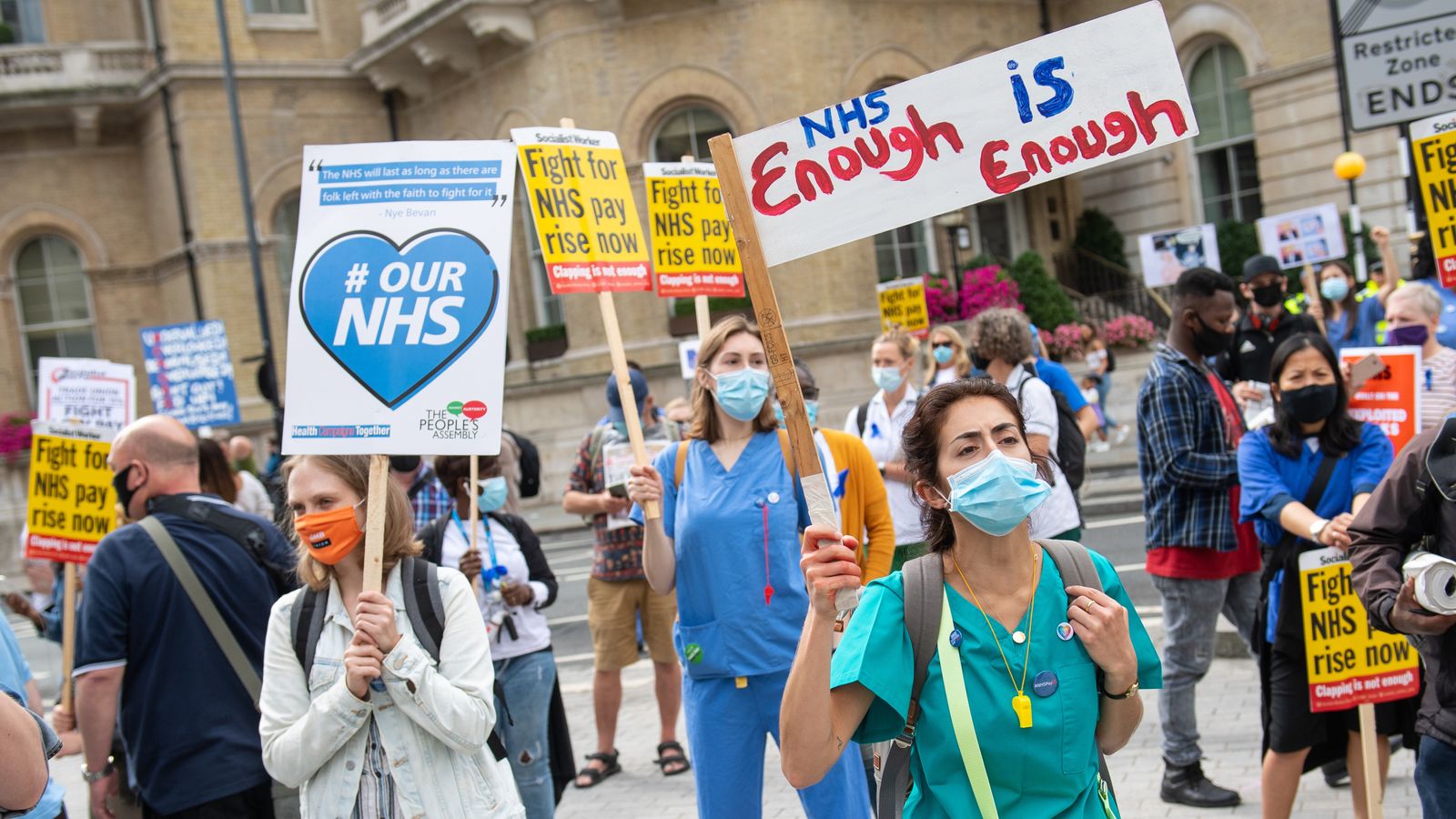