Breakthroughs in the field of health will be honoured Monday when the 2020 Nobel season kicks off with the medicine prize, as the world battles the worst pandemic in a century.

The medicine prize announcement, due at 11:30 am (0930 GMT), will be followed by the physics prize on Tuesday and chemistry on Wednesday.

The most closely-watched awards — for literature and peace — will follow on Thursday and Friday, while the economics prize wraps things up on Monday, October 12.

This year, the coronavirus pandemic has put the global spotlight on research.

“The pandemic is a big crisis for mankind, but it illustrates how important science is,” Nobel Foundation head Lars Heikensten said.

No prizes are expected to be awarded this year for work directly linked to the new coronavirus, as Nobel prizewinning research usually takes many years to be verified.

The prize-awarding committees are “not in any way influenced by what is happening in the world at the time,” Erling Norrby, the former permanent secretary of the Swedish Royal Academy of Sciences which awards the science prizes, told AFP.

“It takes time before a prize can mature, I would say at least 10 years before you can fully understand the impact” of a discovery, Norrby, himself a virologist, said.

The work of the various prize committees is shrouded in secrecy and the names of the nominees are not disclosed for 50 years, leading to rampant speculation.

Swedish public radio SR and the country’s biggest daily Dagens Nyheter both suggested Monday’s medicine prize could go to French-born Australian Jacques Miller and Max Cooper of the US for their discoveries of T-cells and B-cells in the 1960s, which led to breakthroughs in cancer and virus research.

The pair won the prestigious Lasker Prize in the US last year.

Perhaps appropriately, given the current pandemic, the medicine prize kicks off the Nobel season — seen is a bust of prize founder and Swedish inventor and scholar Alfred Nobel Photo: AFP / Jonathan NACKSTRAND

Or the nod could go to Lebanese-born American geneticist Huda Zoghbi for her discovery of a genetic mutation that leads to the brain disorder Rett Syndrome, both SR and Dagens Nyheter said.

Dagens Nyheter also tipped American Mary-Claire King, who discovered the BRCA1 gene responsible for a hereditary form of breast cancer, and researchers who worked on a cure for Hepatitis C, Ralf Bartenschlager of Germany and Americans Charles Rice and Michael Sofia — a trio also awarded the Lasker Prize in 2016.

Two names mentioned frequently are Emmanuelle Charpentier of France and Jennifer Doudna of the US, for their gene-editing technique known as the CRISPR-Cas9 DNA snipping tool, a type of genetic “scissors” used to cut out a mutated gene in a human embryo and replace it with a corrected version.

Chinese-born American Feng Zhang also claims to have discovered the technique, which could be eligible for both the medicine and chemistry prize.

Others also mentioned include immunologists Marc Feldmann of Australia and Indian-born British researcher Ravinder Maini, for work on rheumatoid arthritis, and American oncologist Dennis Slamon for research on breast cancer and the drug treatment Herceptin.

For Tuesday’s physics prize, astrophysicists Shep Doeleman of the US and Germany’s Heino Falcke could win for work that led to the first directly observed image of a black hole in April 2019, according to Dagens Nyheter.

SR meanwhile saw it going to American mathematician Peter Shor who paved the way for today’s research on quantum computers, or France’s Alain Aspect for his work on quantum entanglement.

For chemistry, SR predicted the honour could go to Christopher Murray for his work on semiconductor nanocrystals or to US gene sequencing pioneer Leroy Hood, while Dagens Nyheter tipped Americans Harry Gray, Richard Holm and Stephen Lippard for work in the field of bioinorganic chemistry.

Nobel watchers say the peace prize could go to press freedom champions such as Reporters Without Borders or the Committee to Protect Journalists, climate activists such as Greta Thunberg and the Fridays for Future movement, or an organisation like the World Food Programme, the World Health Organization or Transparency International.

Nobel Prize in Medicine for discovery of hepatitis C virus

Wed Oct 7 , 2020
Three scientists won the Nobel Prize in medicine Monday for discovering the liver-ravaging hepatitis C virus, a breakthrough that led to cures for the deadly disease and tests to keep the scourge out of the blood supply. Americans Harvey J. Alter and Charles M. Rice and British-born scientist Michael Houghton […] 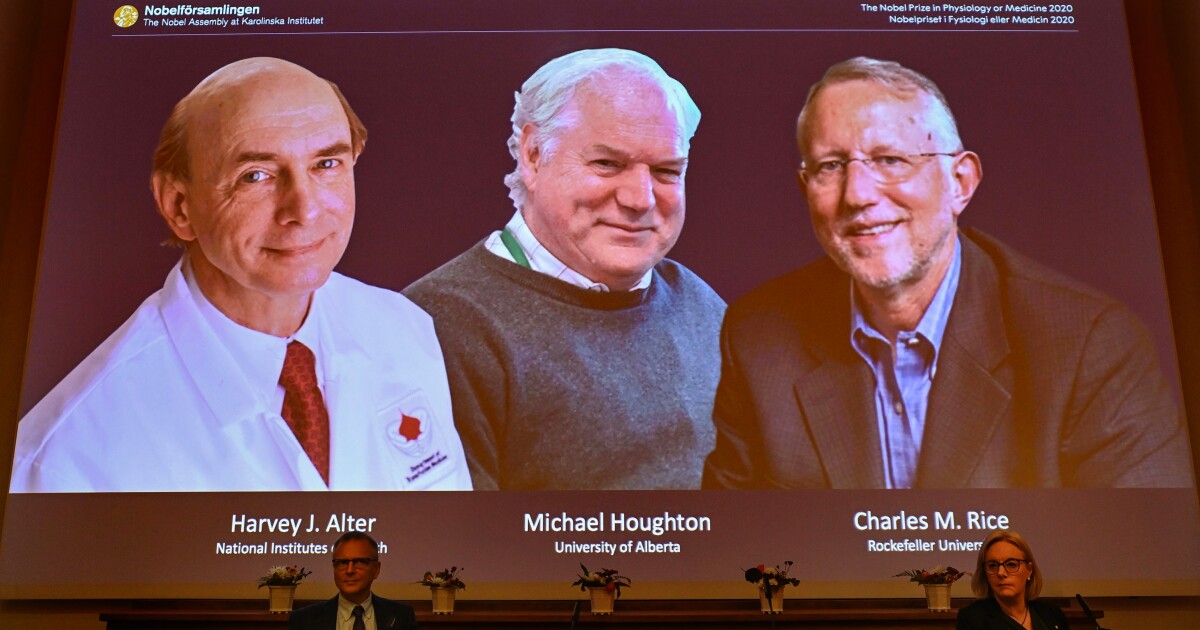